Home in My Palms
Amin Alsaden

For a displaced person, who knows that home can neither be remade here nor necessarily found back there, food can metabolize into memories that may conjure a sense of place. The fruit of the date palm tree (Tamr) evokes home for me, and perhaps for many other Iraqis.

My family could always count on dates, even when we experienced food shortages during the Gulf War and the brutal international sanctions imposed on Iraq in the 1990s. Growing up, I had a complicated relationship with this fruit though: we usually had the dry variety—chewy, starchy, and at times excessively sweet. But it was reliable, and often the only available food; unlike eggs, meat, and even bread, which became luxuries at that time, dates were accessible, reasonably priced, and preserved well. Precisely because of that, however, dates also bring back the hardship of those years.

Our relationship with dates was unlike that with other foods: dates were not abstract, detached from their source. We were surrounded by palm trees, which gave that flat landscape its distinctive character. The formidable cactus-like plant is peculiar; its robust and gritty trunk shoots into the sky, to explode in prickly leaves protecting the bountiful fruit clusters under the feathery plume. The tree stands aloof, defying the odds of climate and the vagaries of time. And when these trees come together to form orchards, of different densities, they resemble a large colonnaded hall, with a generous canopy that shelters humans, animals, and even other plants against the ruthless sun.

In the collective psyche, palms elicit a constellation of things. In the local tradition, this is the sacred tree that should never be cut down. Stylized depictions seen in Mesopotamian reliefs are reminders of how long this tree has been cultivated on this land, the countless events it has witnessed, and how much fruit it has borne over thousands of years. In Islam’s holy book, it is the tree under which the Virgin Mary gives birth, and one of the earthly blessings bestowed by the Creator. Muslims ritualistically break their fasting with a date at sunset during the month of Ramadan. In modern poetry, the palm tree is what Badr Shakir Al-Sayyab immortalized in the opening verse of his seminal Rain Song, about being exiled from Iraq: “Your eyes are two palm tree forests at dawn.”

The fruit itself has numerous associations for Iraqis: the black syrup (Dibs), a breakfast staple; the golden stuffed cookies (Klaichah), baked especially to mark the festivities of Eid; the amber vinegar (Khal), and the translucent white anise-flavored spirit (Arak), both products of fermentation; and the clay-colored pudding (Halawah), made for funerals, and distributed in honor of the dead.

There is an ineffable continuum between this fruit, the tree, and the landscape. The orchards formed the architecture of the elusive space we call home, which we try to recall once we leave those once familiar terrains. After departing, the physical settings we associate with home crumble, left behind, and possibly never visited again. But with some foods, relished privately or with others, a specter of home can be (re)created, which can be as nourishing, as imperceptible, and as fleeting as the mundane act of holding and ingesting a date. 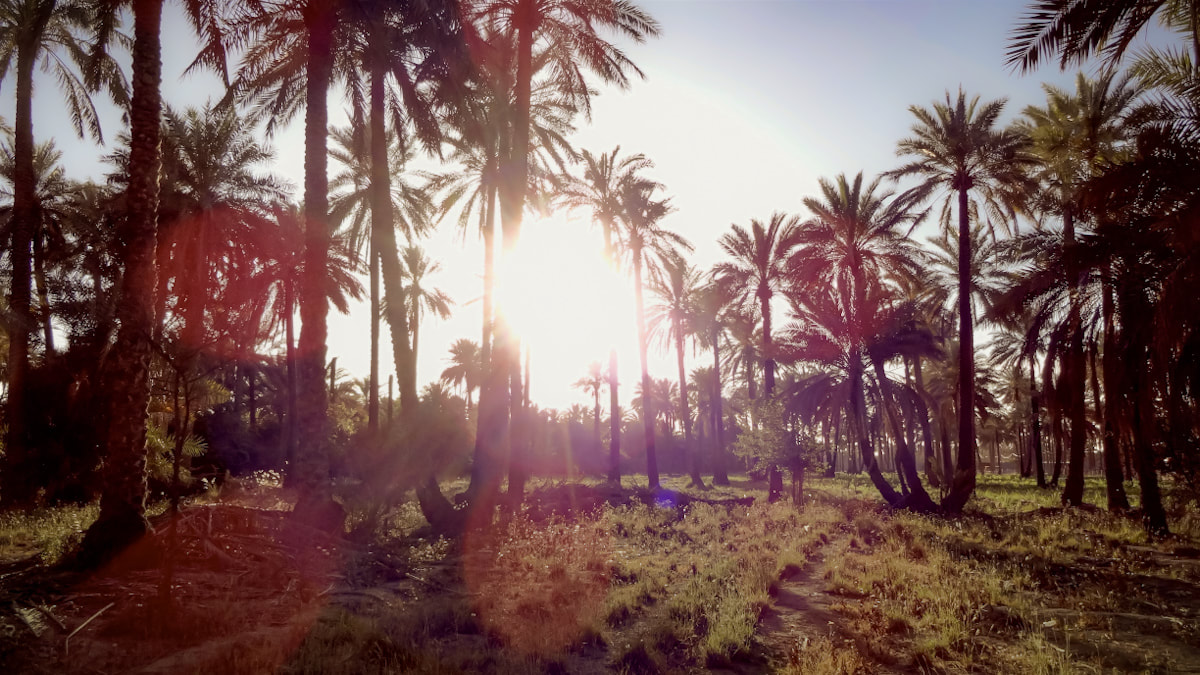